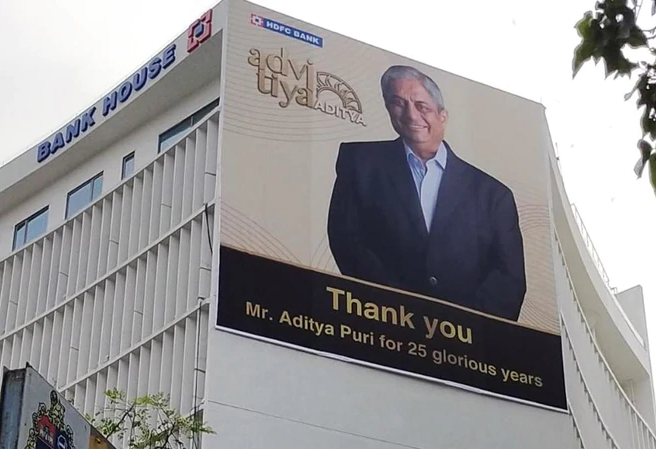 Some leaders are beyond the competition! And Mr Aditya Puri is one among them. He was retired on Oct 26th, after serving and heading HDFC Bank for over 25 years.

The now-former MD, CEO of HDFC bank was given a farewell by HDFC bank by hanging a Huge wall hanging of Aditya Puri at HDFC Bank HQ in Mumbai.

But what was interesting is that even rival banks paid their tributes to the banking stalwart through their respective social media Twitter handles.

ICICI Bank and Kotak Mahindra Bank shared a tribute tweet on their Twitter handles respectively. Which goes on to show how marvellous a personality is Mr Aditya Puri.

#ICICIBank thanks you, Mr. Aditya Puri, for your contribution to the Indian banking industry. Throughout your illustrious career spanning decades, you have been an inspiration to many. We wish you the very best for your future endeavours. @HDFC_Bank https://t.co/8ZjYzicKBO

HDFC Bank replied back to ICICI bank’s tweet with a quote by Henry Ford.

Kotak Mahindra Bank also tweeted from their official handle for his stellar contribution to the Indian banking sector. They also passed their best wishes to the new CEO Sashidhar Jagdishan.

HDFC Bank replied to the tweet saying It’s so nice to see banks come together as an MD retires from his illustrious career.

It’s good to see competitors giving respect to each other. This is one good example of how brands can utilize social media to promote their brand value.